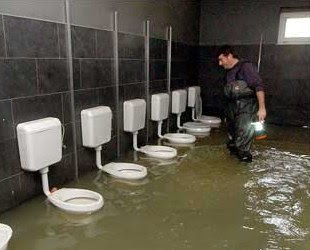 HIGASHIHIROSHIMA, Hiroshima -- A plumbing blunder at Hiroshima University's Higashi-Hiroshima Campus resulted in water for toilet flushing being sent to drinking taps for more than a decade, it has emerged.

University officials announced the mix-up on Friday. The problem was uncovered after about 80 students at the campus who drank the water in July fell ill, with symptoms including vomiting and diarrhea.

Officials said the pipes for high quality drinking water and low grade toilet flushing water at the gymnasium on the campus had been attached the wrong way around. They said it was believed the pipes had been fitted incorrectly since the gymnasium was completed in April 1993. (Mainichi)

Chemtrails spotted in the movie CARS!